The Arc-E-Tect's Prediction on Activities and Roles

It's 2017, meaning 2016 is a done deal, and most of my predictions for 2016 I made about a year ago and never got around documenting in any form have proven to be absolutely bogus. Which leads me to come up with my predictions for 2017 and properly document them. So continue your effort reading this post and hopefully you'll enjoy reading them. Unfortunately we'll have to wait for about a year to find out to what extent I got it all right, but for now, ...Activities.

Why Activities? Activities because we’re breaking down silo’s in 2017 and expect people to work in teams with responsibilities become team concerns. Consequently, we’ll see less explicit roles, more implicit roles and activities shared and distributed within teams. Roles? Where we’re going, they have no roles.

Activities in, Roles out 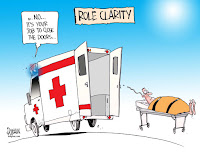 The thing is, we’re moving, as an industry, in the direction where we want be able to get feedback as early in the process as possible, which means that every person concerned with creating and delivering a products will be involved in everything needed to create that product and ensure that it works as intended and more importantly as needed. In this setup, everybody is what we in 2016 called a full-stack developer. Concerned not only with developing the software, but also with developing the infrastructure it needs to run on. Or the other way around, not only concerned with setting up the infrastructure on which the software is going to run on, but also with creating that software.
And on top of that, the whole team is about creating value for the business, determining the right level of quality and more importantly ensuring that that level of quality is part of the product. Meaning that everybody tests, tests and tests some more. Not because testing is a step in the delivery process, but testing is part of the product creation process. The same goes for other areas. For example security and compliance is no longer something that is considered an afterthought or something that is moving along in the sidelines, but instead is an integral part of the product. The DBA is no longer a separate role, but instead the team will ensure that tuning of the database is an activity everybody partakes in.

What does this mean? It means that we don’t have a tester anymore, yet we’ll be testing more than ever. Not because we’re more insecure or self-conscious, but because everybody in the team will be testing. Or rather will ensure that the product is tested. Same goes for the security officer and the security architect. They’ll still be there on an enterprise level, but instead of doing their magic to the products, they will define risk and policy and principles and the team will ensure that the product complies to all.

Team members will get an implied role because the show the most affinity or expertise in some area and rely on others in other areas. But everybody will be responsible and accountable to perform activities instead of assuming a role.

Thanks once again for reading my blog. Please don't be reluctant to Tweet about it, put a link on Facebook or recommend this blog to your network on LinkedIn. Heck, send the link to my blog to all your Whatsapp friends and everybody in your contactlist. But if you really want to show your appreciation, drop a comment with your opinion on the topic, your experiences or anything else that is relevant.